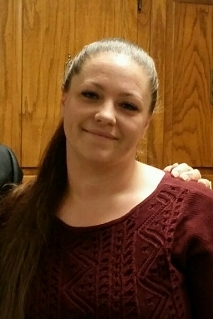 Maegan Prince is a graduate from Trinity Christian Academy and is currently employed at Voya Financial. Very early in her youth, Maegan could be heard singing at every chance she could and continues to this very day, always singing while she goes through her normal daily activities. Whenever a group of people are sitting around singing, Maegan can usually be seen participating with song book in hand.

She has been schooled in music by her late grandfather, Mr. Gordon Prince, her father, Mr. Phillip Prince, Mr. Charles Towler, Mr. Jack Clark, Ms. Tracy Phillips and Mrs. Eloise Phillips. She has been helpful to her father in the Jacksonville Gospel Singers Association in Jacksonville, FL, as well as heading sectionals during The National School of Music. In 2007, she began assisting her aunt, Mrs. Lynn Prince Sessions, in the Beginners class at The National School of Music. But soon, as also with her sister, Ms. Allison Prince, began having her own class in the beginners, and at times, intermediate classes at the National School of Music. Maegan has written several songs that have been been published in our church hymnal as well as a few of the convention music song books. Maegan lives in Starke, FL